A knot is defined as a closed piecewise linear curve,
occupied in theory 3-D Euclidean space known as R3,
our knots are different from what you often observe,
not a piece of string with free ends dangling loosly.

The theory of knots is a branch of math called Topology and other,
you are now challenged with the Problem of the Placement,
the embedding of one theoretical outline of space into another,
represented as boundaries of the aethersphere in tracement.

An essential elemental form of a knot involves embedments that sync,
the unit circle inserted into three-dimensions of space in groups,
two or more knots that are embedded together are called a link,
aetherspherical knots almost always appear in closed loops.

Two knots or links exercise the equivalency principle,
if one can smoothly be transformed into the other,
if there exists a homeomorphism on R3 to grapple,
which maps the image of the first knot to the nother.

There’s no cutting of these knots resolve,
allowing them passage to be equidistant,
like people it’s a difficult riddle to solve,
if two given knots or we are equivalent.

Tame knots are polygonal paths in space-time that is three-dimensional,
all other knots crossing your math path are a Wild and strange norm,
knots that are equivalent to the unit circle are unknotted and trivial,
the non-trivial Trefoil comes in a left and a right handed form.

The Trefoil is not equivalent to the unknot,
it’s only equivalent when,
the homeomorphism mapping one into the other,
includes a reflection,
the 8 knot is equivalent to their mirror images,
they are known as Achiralian. 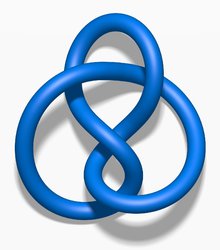